I've invited a couple of metal detectorists onto the farm and they're walking up and down the fields now. They've only been at it a few minutes but already they've found...

A Victorian penny
A gilt button
A harness stud
A piece of shrapnel from the Second World War
and- most intriguingly- two large bore musket balls.

The balls are bigger that you'd expect a farmer to be firing off. They imply the presence of soldiers or at least of military firearms. 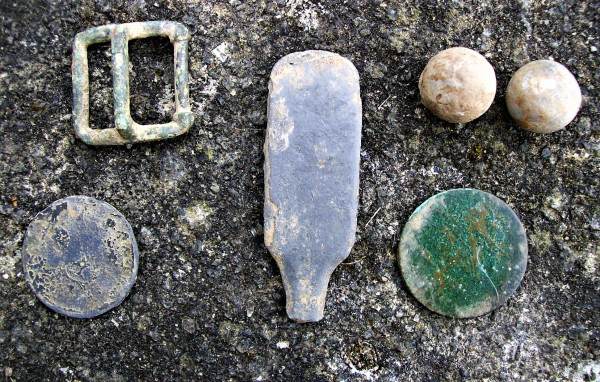 So what we're seeing here is a spread of articles likely to turn up on land that has been used for subsistence farming for a couple of hundred years.  Nothing high status, nothing older that the 18th century (well I suppose the musket balls could be older but probably aren't.) Other items include a George V sixpence- which was legal tender until quite recently and could have been dropped by my mother or father, a lot of shrapnel from the Battle of Britain, several lumps of old iron from farm equipment or buildings and a mystery item which looks like part of a locket (but probably isn't) that one of the detectorists has taken away to research.

The detectorists only had time to work over part of the property and will be coming back next week...
Collapse