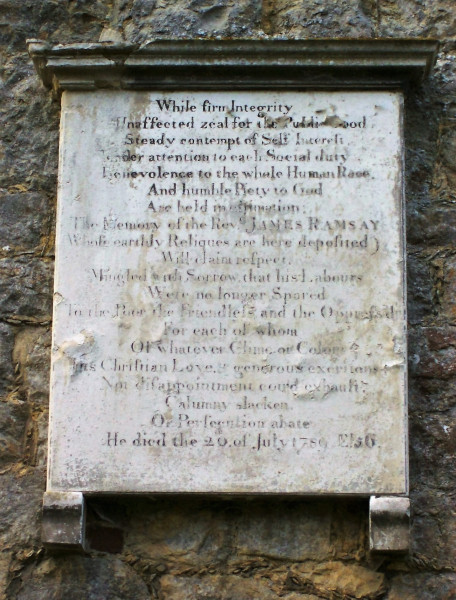 This memorial tablet sits high up on the exterior east wall of Teston church. I snapped it because I liked the sentiments- and the orotundical, classical dignity with which they were expressed. I had no idea who James Ramsay was. Just a decent 18th century country parson I supposed.

While firm integrity, unaffected zeal for the public good, steady contempt for self interest, tender attention to each social duty, benevolence to the whole human race and humble piety to God are held in estimation the memory of the Rev'd James Ramsay whose earthly reliques are here deposited will claim respect, mingled with sorrow that his labours were no longer spared to the poor, the friendless and the oppresssed, for each of whom of whatever clime or color his Christian love and generous exertions no disappointment could exhaust, calumny slacken or persecution abate.

I looked him up when I got home and found the epitaph sells him short. I suppose the writer thought his achievements so well-known they only needed to be glanced at. 200 years later, while not forgotten, Ramsay is less famous than he deserves to be. He was a naval surgeon who encountered the horrors of slavery on a voyage to the West Indies,  in consequence of which he abandoned the sea, took holy orders and became an impassioned abolitionist. He served in parishes in the West Indies and Kent, wrote books and powerfully influenced more famous men like Wilberforce and Clarkson. There are those who think no single individual did more to end slavery in the British Empire.
Collapse