Stag: Which has just finished. Comedy thriller- one part Deliverance to three parts And Then There Were None. Set in the Scottish Highlands- and filmed on location. I thought I'd guessed the solution and I had- but there were a couple of an extra twists in there I hadn't anticipated. If it were a movie I would expect it to achieve the status of cult classic; as it's only TV it'll probably disappear into the archives- but who knows?

The Night Manager: Not nearly as good as Stag, but must have eaten up lots more money. Very straight-faced and with very little to say for itself.  Arms Dealers are wicked. Spies are crooked. Tom Hiddlestone seems to be auditioning for Bond and he's welcome to it. OK, I'll keep on watching because it's quite entertaining- even through the engine didn't really start ticking over sweetly until episode three.

Happy Valley: The second season of a show that has become a benchmark for this sort of thing- written, directed and produced by women- and as Yorkshire as batter pudding. That makes it sound cosy but it isn't. Sally Wainwright does wonderfully truthful dialogue- and in the matriarchal Sergeant Catherine Calman she and Sarah Lancashire have created one of television's greatest characters- a female Maigret plus vulnerability, bloody-mindedness and laffs. 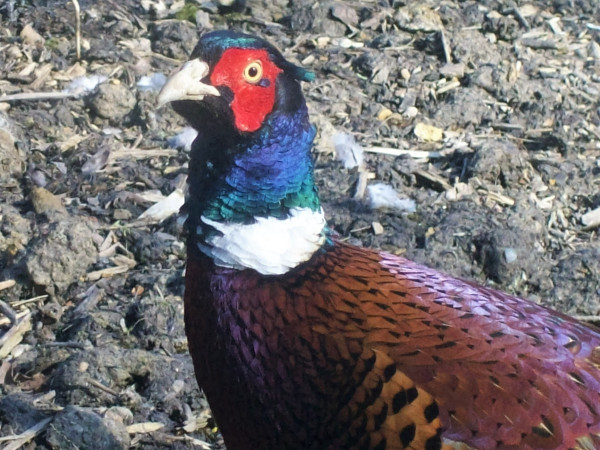 We had this person visit our bird feeder this morning. The picture hardly does him justice- the neck shimmering from deep purple to sea green, the body from bright bronze to shocking pink. And to think some people are crass enough to shoot his kind for fun!
Collapse