I collect angels. Here's one from a late 17th century monument in St Giles, Maisemore- just outside Gloucester. 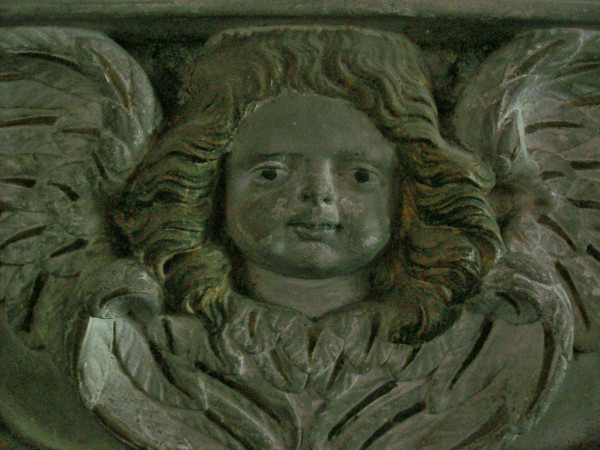 We set off from the Welsh borders mid-morning, stopped at various villages so I could take pictures of churches and things, had lunch at Polly's Tea Rooms in Marlborough (very good it was too) and  got home yesterday afternoon- just in time for tea.
When you're stuck in one place the country expands around you, but when you go out and cover the distances it shrinks again ("Hello Cotswolds...Goodbye Cotswolds") and you realise what a very small place it is.

The first film is old Hollywood and the second is new/independent Hollywood.  The first gives John Wayne a wonderful opportunity to cut loose and win himself an Oscar- and the new second is an ensemble piece that feels like it's set in a world closer to the real Wild West or, at least, to the world of Portis' wonderful book- with all the whiskers and Bible speak. I'm not sure I'm convinced by Hailee Steinfeld; she's good at giving lip but looks too soft to have grown up on a hard-scrabble Arkansas farm. Mattie Ross- with her Old Testament vengefulness and rectitude- is a terrific role, but it would require a 14 year old Maggie Smith to fill it adequately- and where are you going to find one of those?  (The earlier film cheats  by casting Kim Darby- who was in her twenties and convinces in some lights but not in others.) Matt Damon is a great improvement on Glen Campbell. (There was a questionable vogue in the 60s for casting popular singers in westerns- presumably to appeal to the yoof- and not all of them could act.) Jeff Bridges is a very different proposition from John Wayne, but he fills the screen in much the same way. So who has the edge, the Duke or the Dude? Don't make me choose because I love them both. The earlier film is high spirited and the second is humorous and dark- with a Coenesque infusion of the weird and ghoulish. They're both good- excellent even- and the book is better. True Grit is an evergreen classic- and I don't see they shouldn't keep on remaking it- just as they keep remaking Little Women and Wuthering Heights and Great Expectations. Every generation deserves a Mattie and a Rooster of its own.
Collapse