The fireworks woke me up. They weren't very close.  My mother's carer (from the company that covers for Kirstie's days off) is coming in late so we treated ourselves to a bit of a lie-in.

The first morning of 2015 is mild and damp and overcast.

This could be the year when the international status quo unravels. But then again it might not be. Never underestimate the ruling class's dedication to its own interests. There will certainly be trouble in Greece (a safe prediction because there already is) and that could spread across Europe. The Euro might collapse and with it the EU itself.

There's going to be a UK General Election in May. The outcome could go many ways. It seems likely we'll have another coalition government. Possibly Labour and the SNP. But, then again, it could be the Tories and UKIP. Nigel Farage keeps bobbing along like a helium filled balloon in spite of almost weekly scandals. UKIP are a frightful shower but the electorate don't seem to have noticed yet.- and that I suppose is because the media (which are more than a little in love with him) persist in portraying Farage himself as colourful and credible.

I didn't mean to write about Farage. But he has a way of worming his way in. Personally I can't stand the man. He makes me think of overflowing ashtrays.

Our house should sell soon. All this past year we've had the Post Office redirect our mail, but that arrangement lapses tomorrow. Ailz has circulated everyone with our new address.

I left for the north of England just before my parents moved to the farm, so it was never my home. How odd that it should be now! It's not somewhere I'd have chosen for myself- too isolated, too ugly- though the fields that come with it are wonderful.This past year we've been turning it into a place we feel comfortable with. Most of the furniture is still my mother's but most of the pictures are ours (we've tidied away most of the racing memorabilia and my mother hasn't noticed.) I have a chair in the corner of the dining room, with a bookcase alongside, where I sleep in the afternoons (Mary says I'm too young to sleep in the afternoons but I've always been lethargic.) In a day or two we will be adding a cat. 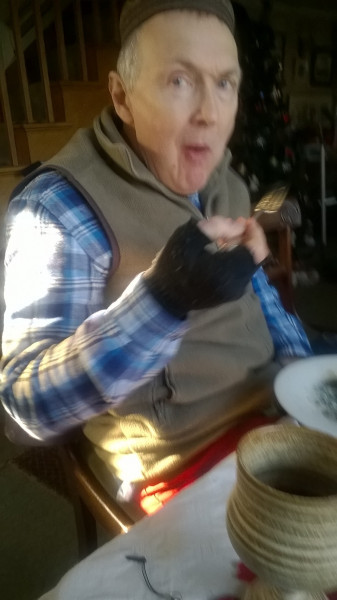 Ailz took it with her phone a few days back.