Now that we're Kirstie's sole employers, we can have her come in at random times- and we're getting out of the house more often. Last week, for instance, we had a day out at the cinema and another day out when we just set off driving and wound up in Mayfield.

I feel the need to get out more often because firstly it's winter and secondly life on the farm consists in sitting on various different chairs, putting meals on the table and keeping track of my mother.

Talking about sitting on chaiirs, Ailz says she saw my father a couple of days back, sitting in the armchair that used to be his. It was a momentary thing so she can't be absolutely sure but I've never really doubted that he's keeping an eye on us all.

Another thing I don't much doubt is that the aliens are here. I've been reading a lot about them recently. Did you know that in 1954 President Eisenhower had meetings with two different sets of them- the Nordics and the Greys- and made a treaty with the latter group whereby they shared some of their advanced tech in return for being allowed to abduct and experiment on US citizens- a privilege they promptly abused? Do I believe all that? Well, I don't disbelieve- and there's a certain nuggetiness about the information I find convincing. You want to make things up, why make this up? Why pick on Ike when there are more glamorous presidents to lie about? I'm not a fool and I've been looking out for the debunkers too- only they don't seem to have anything much to say except, "piffle".

Look, there's something being covered up at Area 51.That's undeniable.

According to the legend, Ike said "Pretty please, but would you tell me what you're doing out there?" To which the people in charge replied, "No can do." So Ike came back at them with "Listen, I'm not only your President but the guy who liberated Europe and if you don't let me in on the secret I'm going to show up on your doorstep with the Ist Army." So they gave him access.

According to the same legend- or maybe another- Nixon (boo hiss) turned over the far-out, woo-woo stuff to the private sector- which is- of course- about three times as evil as the Pentagon.  Since his time US Presidents have been very largely out of the loop. You'd think the Supreme Commander would have gold card access but apparently that's not the case. The real rulers iof the planet view him as a very low-level functionary.

Talking about labyrinths, they've got one in the churchyard at Mayfield and I walked it yesterday. 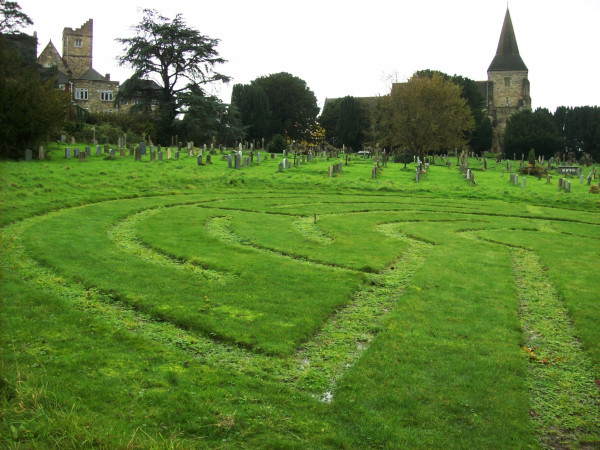