Georgina had Time Out of Mind playing on the stereo and I was sort of almost dancing- shuffling  my feet to the beat- while Ailz looked through the Indian fabrics. Georgiina said she'd seen Dylan play live in some Midland town just after he went electric and the set was  half acoustic and half him tearing it up with the Band behind him. Then she showed us an original photo she has of three off duty dudes and asked us to guess. "Think super group," she said, and I said "Is that Ginger Baker?"  Her shop is called Ruby in the Dust and it's full of beautiful things.

We'd eaten at Pomegranate- which is a fish restaurant, mainly. This is the second time we've been there. I had fish nicoise and I don't think the fish had been out of the sea for more than an hour or two.  We drank Biddenden cider. I had two bottles- hence the dancing.

In Robert's Rummage (where I got two 19th century prints for £6.00) the proprietor (Robert presumably) was taking conspiracy theory with another old bloke.

"The Americans blew up the twin towers, you know. And then there's Kennedy. No way was it Oswald who shot him".

"So what was Oswald doing in the book depository with a gun?"

"But that's the main thing. He didn't have one."

I could live in Hastings, I tell Ailz. "I still think Margate has the edge", she says, "I know what", she adds. "We'll live in one and take our holidays in the other." 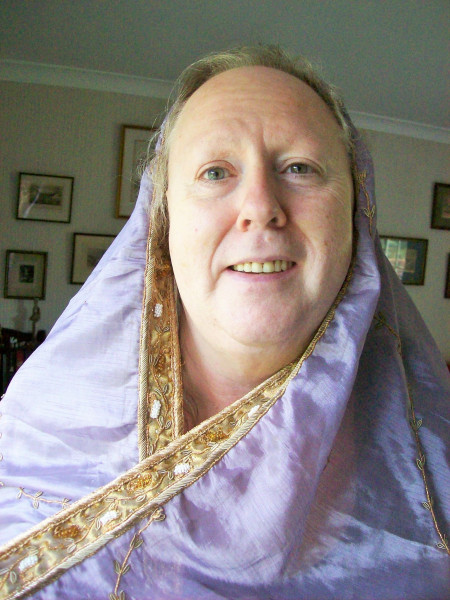 Ailz in finery from Ruby in the Dust

I was watching a very enjoyable documentary about Egyptian funerary practises last night and right at the very end the presenter spoiled it- or more accurately annoyed me- by saying something like "We 21st century people may think the Egyptians were wasting their time on all that mummification nonsense- because Death is death- but we're still talking about Kha and Merrit so in a sense..."  And I thought, "Talk for yourself and your metropolitan mates. I have no doubt the Egyptian Duat existed and indeed- being timeless- still exists."

Here, have a poem. I seem to have posted this before, but...

TWILIGHT ON THE FIELD OF REEDS

The old Egyptians are winking out
On the astral- so my informant claims.
Her theory is they rely on us
Thinking about them, speaking their names
To raise the psychic energies
That keep  them in the Field of Reeds,
But now our input is dropping off
Which makes her sad because she’s a fan
Of theirs and  on the way to becoming
An adept in Egyptian magic.
Me, I’m much less sympathetic.
Haven’t they had their money’s worth,
I ask, of feasts and dancing girls
And all the things you see them doing
In murals- shooting ducks for instance
Or spearing hippopotami?
Isn’t it time they got in touch
With how things are back here on earth
Where all that stiff hieratic grace
No longer cuts it, but (thank heaven)
Artificial hips are in
And dental care is a lot improved?
You’ve rested up, so come on,  guys,
Go get yourselves an incarnation.

Another Egyptian poem. This one I can date. It was written in 1986. Manchester University has a great Egyptian collection- much of it assembled by Flinders Petrie. I used to say I learned more about the ancient Egyptians from the Manchester Museum than I did from going to Egypt.

This dead thing in its body bag and box
(Mummies have faces like grandfather clocks)
Stood in a rich man's hall.  Claire Sheridan writes
He chucked it out for spooking them at nights.
Its little twiggy toes make me feel sad.
I wonder what kind of an afterlife it's had.
Collapse