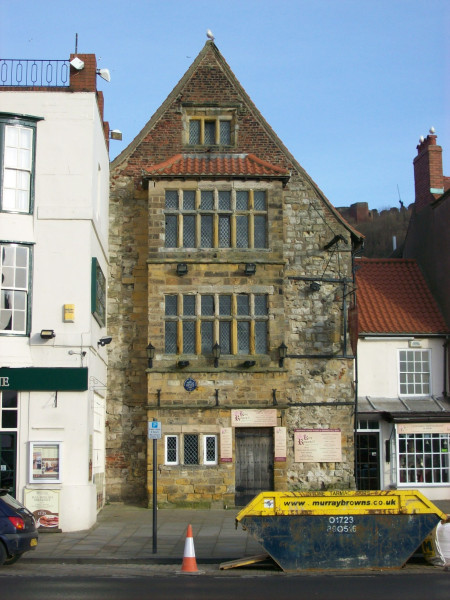 This is the Richard III Tea Rooms in Scarborough.  I'd like to think the King stayed here (as legend says he did) but I can't help wondering why he would want to when there's a huge castle sprawling across the hill above.

I take pictures with a view to posting them at wikimedia commons. This gives me a focus. (My archive- I'm poliphilo over there as well- is getting to be huge.) My choice of subjects is governed by (a) my own interests (b) what I think other people might find interesting and be able to use on their websites. This second stipulation has pretty much cured me of my juvenile taste for whacky camera angles.

It may seem as if I have a particular thing about churches. Well I do, but they're only a sub-section of a larger category called Old Things Made of Stone. It just so happens that churches are common and accessible. I am equally enthusiastic about bridges, manor houses, preaching crosses, monastic ruins, prehistoric monoliths and things like that; it's just that they're thinner on the ground. I make an exception for castles and large country houses because I find them oppressive and vainglorious. I am an not an admirer of Sir John Vanburgh. A few days back we were in the neighbourhood of Castle Howard- and every time we came to a sign-post pointing to it I recommended we take the other fork. My least favourite building on the planet is Versailles.

I like old things made of wood as well, but they're rare- for obvious reasons.

I don't despise modern things. I have a prejudice against Victorian churches (I find them insincere)- and I wouldn't be particularly bothered if they pulled down the Houses of Parliament- but I'm keen on the relicts of the industrial revolution. Give a Victorian architect stone to build in and he imagined he was wearing hose (or a toga) but give him steel and glass and he became modern and took risks. I revere Brunel.  I admire the market hall in Ashton. I'm keen on piers. 20th and 21st century stuff I'm picky about. Whereas I'll photograph anything medieval that gets in front of the lens a contemporary building has to grab my attention by being weird or outrageous or beautiful or storied.

Ah, yes, stories. I'll photograph anything with a story attached. The Richard III Tea Rooms in Scarborough ticks just about every box. It's old, it's made of stone and it has associations with one of my favourite historical characters. I've been known to take photographs of statues. And I'll go out of my way to visit battlefields even though they rarely look anything like they did when they were being fought over. Of all the battlefields I've visited the most atmospheric was Towton.

I sometimes take landscapes, but they're rarely pure. There's usually a building somewhere in the frame- and very often there'll be gravestones in the foreground. Gravestones have always been a passion of mine. I like rivers. I like the sea. I like boats- especially boats with masts because of the strength of the verticals and the tinkling sound the hawsers make as they tap against the mast.

And now we're straying off the subject...
Collapse