The Waterhouses aqueduct is my favourite building within walking distance. It was put up in the 1790s to carry the Hollinwood branch of the Manchester and Ashton-unde-Lyne Canal across the river Medlock in a place the Victorians turned into a leisure resort and renamed Daisy Nook. It's massive, artless and has nothing about it that doesn't express what it's there for.

I've tried to photograph it several times and never liked the results. You have the problem that the best vantage point is to the north and you're looking into the sun. Yesterday I tried again. It was a dark, misty day and it didn't matter where the sun was because you couldn't see it. 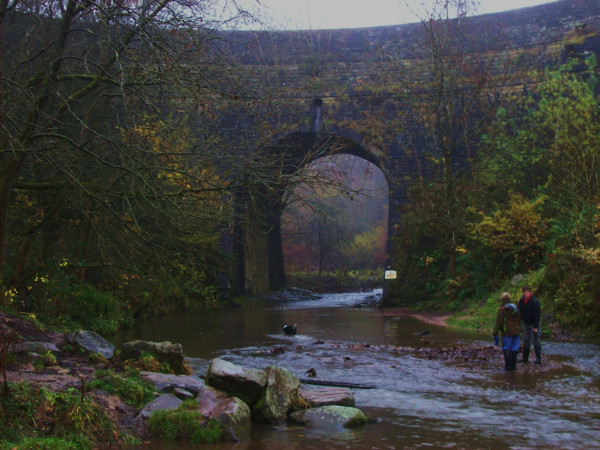 Those two women (nothing to do with me) came and stood briefly in exactly the right spot. They had two dogs with them- one of whom got trapped in a piece of railing that had been dumped in the river. The younger woman rescued it and carried it to the bank. There used to be a footbridge where the rocks in the foreground are but it has disappeared since my last visit. The women were wearing gumboots and waded across. I wasn't- and had to take the long way round- across the aqueduct itself.

Yesterday was the 9th anniversary of my father's death. My sister reminded me. She and my mother had taken flowers to the Garden of Remembrance. I rang my mother afterwards. "It's just another day," she said-  which is how I think of it too.

Men are being encouraged to grow moustaches this November and I'm joining in. It's something to do with an awareness of men's health issues. I like moustaches, I've worn one from time to time and think it's time they became cool again. My face is a bit puddingy and could do with some spicing up. One of the wax museums put a neat little moustache on its model of David Cameron and he looks tons better- like someone stalwart and dependable from the 1940s.

I don't know where paedophilia comes from and I may be barking up entirely the wrong tree but it occurs to me that if you place young males of the ruling class in schools where it's covertly (or not so covertly) accepted that bigger boys take smaller boys as their bitches you shouldn't be entirely surprised if some of them carry this behaviour over into adult life.
Collapse