We were lying in bed last night trying to remember the words to We Three Kings. I don't suppose I've sung it in 30 years. Nonetheless I dug deep and came up with a version that was 85 % correct. The only verse I had serious problems with was the last one-  in which the author- John H. Hopkins Jnr, who composed it for a seminary pageant in the 1850s- ran out of inspiration and fell back on hallelujahing.

I wrote a humorous little play about the magi once. It was far too smart-ass for its context- it was performed in place of a sermon at some Christmastide service or other- and deservedly fell flat on its face. Even the guy who played Herod (the juciest part) told me afterwards that he'd have preferred something "more traditional".

Andrew Graham Dixon had a programme about the Medici the other day. Cosimo, founder of the dynasty, had a particular devotion to the magi- probably because, as Graham Dixon pointed out,  they're the only rich dudes who emerge from the New Testament with any credit.  He had the painter Gozzoli represent them in a couple of murals- one, in the chaste style of Fra Angelico, in the monastery cell where he (Cosimo) used to go on retreat- and the second in the Medici palace- which is thoroughly blingtastic. 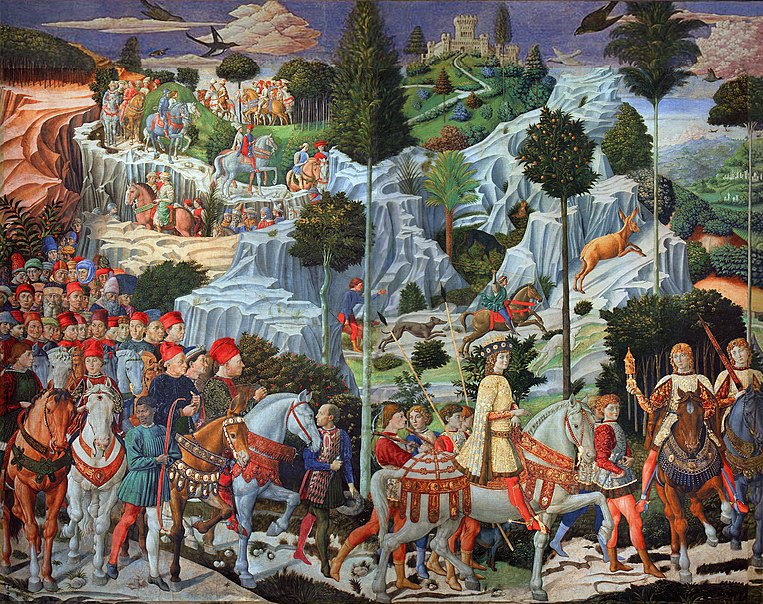 My posts are rarely exploratory. Usually I know the route I mean to take and where I hope to end up. Sometimes I'll happen upon an alternative path and- even more rarely- fetch up somewhere unexpected.  But I never find myself stopping short- out in open country as it were.

Except once or twice in the last few days. You know the posts I mean. They're all a bit gnomic. That's because I wasn't being quite honest, because I was editing too much out, because I was embarrassed to admit I didn't have a map.  They read like I'm laying down the law, but actually I'm asking questions. Real questions- ones I can't answer.

Here's where I'm at:

I was a priest. I gave it up. I'm not going back. I couldn't. I gave it up because I didn't believe- and that's still the case. Trouble is- over the past year or so- I've felt a Christian mindset creeping back up on me. I don't believe in the Christian God, I don't believe Jesus even ever existed, but I'm finding I totally believe in the Christian myth.  There never was a birth in a stable in Bethlehem- I'm almost certain of that- but the myth has me by the throat.  Myths are like poetry. They work in much the same way, by-passing the rational mind, by-passing explanation. I know Yeats's The Second Coming is a sublime poem and I know the Nativity is a sublime myth- but don't expect me to get to work on either with a scalpel because that's not how you treat the things you love.

So am I a Christian? I suppose it depends who's marking the papers. William Blake might accept me as one, but I don't think the Pope would. I am however, by the Church's own rules, still an Anglican priest. When I left (and whether I resigned or was sacked is a moot point) they may have put me on a black list somewhere, but they didn't defrock me- they didn't rescind my priesthood. I'm not in fact sure they could.

Just to complicate matters I am also a Pagan and a Witch.

Perhaps I don't need to make intellectual sense of all this. Perhaps...

And there I'm going to stop- still out in open country- with the Holy City of Sarras over the horizon and maybe not there at all.

I'll be away from LJ over Christmas. No reading, no writing. I think this could be a really good time to take a break.